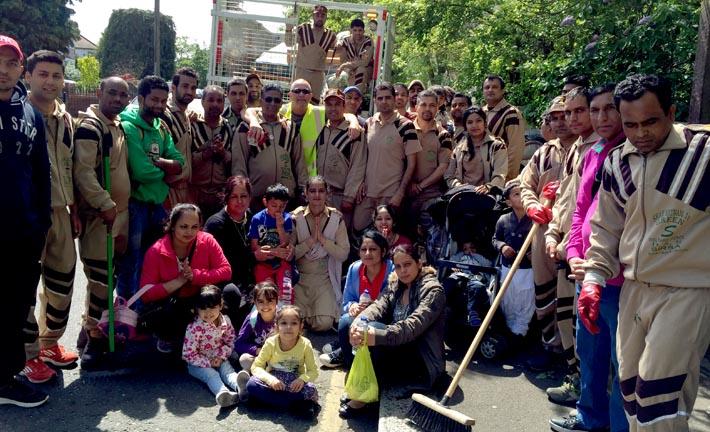 It is interesting to know that the Shah Satnam Ji Green ‘S’ Welfare Force is probably the only humanitarian force in the world in which all the volunteers work towards making the world a better place to live in.

Under the pious guidance of Revered Saint Dr. Gurmeet Ram Rahim Singh Ji Insan, who has initiated 109 activities for the welfare of mankind, these volunteers put in their whole hearted efforts. No wonder this dedication had made them create 17 Guinness World Records.

Amongst these 109 welfare activities is to conduct Cleanliness Campaigns to make the earth clean and to spread awareness about the importance of hygiene. Under this welfare activity, 28 Mega Cleanliness Campaigns have been organized in several cities of India including the Mega Cities of Delhi & Mumbai. The same is expanded globally through the devotees residing outside India by carrying such campaigns in their respective states and countries. These Volunteers of Shah Satnam Ji Green ‘S’ Welfare Force Wing, UK organized its 16th Cleanliness Campaign on request from local council at Redbridge, UK. This event was organized on Sunday, May 10th, 2015 in which about 40 Volunteers of Green ‘S’ Welfare Force, including ladies and children participated.  Within a span of about 2.5 hours these dedicated volunteers cleansed three parts of the area. They removed the overgrown shrubs around Royston Garden, picked up the litter on Studley Drive and Roding Lane South.

As always the locals were amused and bemused to witness such an event in which natives of far off land have come across to cleanse the neighborhood in which they are living. There was widespread appreciation for the cleanliness drive and the selfless intentions of the volunteers.

The Volunteers rather than being tired of the service enjoyed it and felt as if they were getting immense energy form the Supreme Being.